skip to main | skip to sidebar

Salvador was the first capital of Brazil. It is in the third largest bay in the world. It's black and mulatto people outnumber the white and the city vibrates with the sounds of Afro/Brazilian music.


The Forts built by the Prtugese are still standing

Our first indication that Salvador is a pretty run down place was our arrival at our hotel!
This is the building next to our hotel !

And this, we were delighted to see was our hotel!

However the view from our bedroom window was not great!
There people living in this hut!

This was the distant view!
However Salvador is not all like this.

The first thing one does when arriving in a town is to check the onward journey. Lonely Planet is pretty good on telling you how often and when the buses leave for your next destination. We were due to travel from Tiredentes to Ouro Preto by bus, quite possible according to Lonley Planet. But,  Agh we were told there were no buses from Tiredentes to Ouro Preto, unless we wanted to take a 4 hour journey to a big city and then catch a bus the way we had travelled to Ouro Preto - total journey time 6. Hours. Solution - take taxi - 3 hours!  Which of course we did. Can't believe Lonely Planet got it wrong.
Anyway Ouro Preto is fascinating. Set in a very ancient volcano caldera with hills all over the place the city has incredibly steep cobbled narrow streets. The whole city,was, at one time a huge gold mining city. The mining was done by the slaves, who suffered unbelievable conditions.

The slaves then had to mine the gold ore down shafts like this. They worked for roughly 16 hours at a time. In chains.

Some of the old buildings were beautifully restored .
But the cobbles really difficult to walk on.

There were some 20 churches in the city, but all very similar. We learnt here why photographs are forbidden .  The inside of the churches have beautiful carvings of saints and the holy family, all covered in gold leaf.  In the 1970's tourists were taking pictures and having replicas made and selling them.

While proud Grandparents looked on.

We came across a restaurant with waters soliciting you. But which one is the real one?

Ouro Preto is a university town. The students have to make money somehow

From Petropolis to Tiredentes it was a four hour bus ride round and round the bends! It s years since I have felt ill on a bus, but I was in a poor shape when we arrived half way to Tiredentes to stay the night in Soa Joa, not much to see there so we took a taxi a few Kms up the road to the first of the colonial mining towns of  Tiredentes. The early colonials were after gold, but in Tiredentes there wasn't mush, but the town was very old and beautifully restored.

The town square was shady and if you wanted you could take a ride in the cart,

The biggest of some 10 churches was up the top of a very steep cobbled road . Inside was covered in gold, but pictures were forbidden. Why we didn't know.

But we traced our way down the cobbled street to listen to the gold laden stream run under the 15th century bridge.

I talked about cobble stones, but these were something else, and these giant stones were to become the norm!

We left the Island and spent the day traveling to the first of the colonial cities  Petroplois . The city is called The Imperial City. The emperor and his court used to stay here in the summers.The weather was still bad, but the Cathedral was quite something

The colours in the stained glass window magnificent

In one of the parks was a crystal glass palace. The Queen used to exhibit here orchids plants and entertain people to tea!

We walked miles, so we stopped at a local cafe for some tea. We were presented with hot milk and a tea bag!

Llha Grande is a small island about 100 Kms south of Rio and 40 minutes across a very choppy sea. It was raining when we left Rio and it lashed it down as we crossed the sea in the boat. There are no roads, no cars and only bikes and trollies for carrying goods around. The view from our room would be idyllic in the sun.! 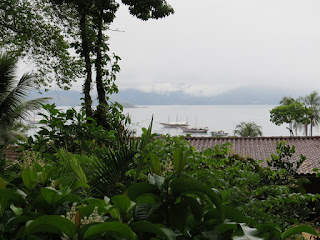 Yesterday we paddled around the village, walking around puddles and avoiding the rain. Thank goodness for light weight waterproof rain jackets and umbrellas!  The island has a checkered history. It has been a penal colony, an immigration holding station for immigrants from Europe and now it is a very popular tourist destination.
The first thing the immigrants and prisoners saw was the cross, that reminds us this is a Christian place! 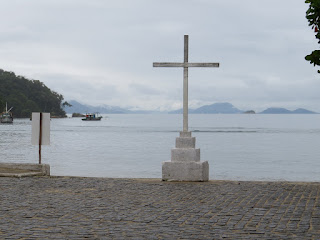 The little church we think must be typical of the 18th Century. 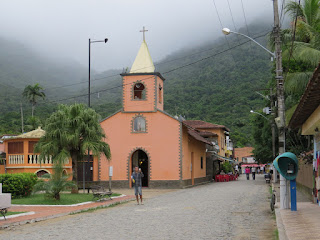 We set off on the 16 th of May, traveling via Heathrow, where we saw one of those HUGE new planes, and we're glad we were not on it. 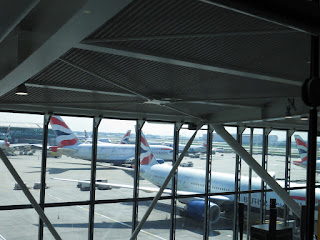 It was 11 hours to Rio and we arrived in a tropical rainstorm . Great!
No comments:


We are just about to leave on an epic journey around Brazil,by boat,plane, bus and car.
The red bag is packed and ready to go again.

More in a few days time
No comments: